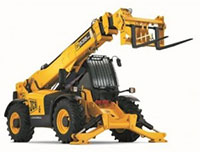 The Difference Between Telescopic Handlers And Forklifts

What are telescopic handlers and how do they differ from forklifts?

Looking at what telescopic handlers do and how they different from forklifts.

Body: It’s not uncommon for some people to group telescopic handlers and forklifts into the same category. After all, they are both versatile machines in any area and can lift and carry large objects. However, there are several subtle differences between the two machines in terms of what they are and how they are used on industrial sites in different industries.

Firstly, there are some aesthetic changes that are easy to notice between the two different vehicles. Telescopic handlers are generally larger in size and they will also have a raised cab which sits on top of the tracks and tyres. There is also the single telescopic arm which can move up and down and can come with a variety of different attachments depending on what the operator wants to use the vehicle for.

Multiple arm attachments. Unlike forklifts that only have their lifting forks, the boom on telescopic handlers can have different attachments fitted to it to help carry out specific functions. Many people do choose to attach pallet forks to the vehicle in order to move exceptionally large or awkward loads but this is just the tip of the iceberg. They can also be fitted with hooks to help them act like a mini-crane on a worksite whilst scoops and buckets can also be attached to help move and transport soft material like dirt or cement.

Extended limits. With telescope handlers such as the Manitou range having a larger body and apparatus, it means that they are able to go the extra distance that forklifts can’t achieve. When used in outside areas, many drivers prefer to use handlers to lift materials or heavy items on to platforms and rooftops as it safer and more practical. Alongside that, the larger wheelbase and body on the handler also means that it much more robust than a forklift and can easily be driven on difficult surfaces like mud and ice making them much better suited for outside use.

Popular with construction and outdoor industries. Whilst forklifts are generally preferred in factories and warehouses, telescopic handlers are usually chosen to work in outdoor areas. The construction industry is a big supporter of these machines as they can be used on both large and small worksites and be customised to fill in for more expensive equipment such as diggers and cranes. It is also used often in the agriculture sector where farmers require larger machines to carry large loads into awkward places that forklift trucks and other light vehicles might not be able to reach.

At the end of the day, both machines have a similar purpose in industry however telescopic handlers have evolved to become better suited for the awkward and large jobs that its baby cousin struggles to deal with on a daily basis.

The Consequences of Dangerous & Drink Driving

A Guide to Construction Site Security