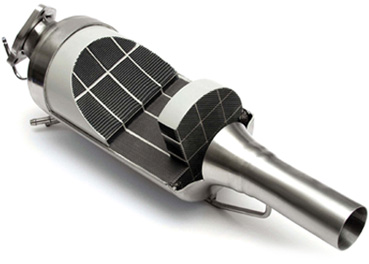 DPF Filter Removal – What you need to know

Did you know that the dpf filter in your Mazda ,Ford, Volkswagen or Bmw is the main cause of turbo failure, in-fact the dpf filter can get so badly clogged it can eventually lead to engine failure, I suppose that’s why most people these days opt for dpf removal, but before you decide on a DPF NI removal I think its only fair that I explain to you how a dpf system works.

Firstly the reason it’s there in the first place is to satisfy the obsessive need that car designers have to preserve the environment, every soot particle which comes out of the exhaust they want filtered down until it meets the EU Motoring regulations, so let’s go into how it actually works.

The dpf filter is fitted to the exhaust system after the catalytic converter, its purpose is to capture the soot particles which have passed through the catalytic converter and store them until the engine management system triggers the dpf regeneration cycle, the dpf regeneration cycle is designed to burn the stored particles, so how does it do this ?

Firstly the engine management needs to know that there is too much soot content stored in the Dpf filter, it does this by measuring the pressure difference at each end of the filter via the dpf pressure sensor, ( for example ) if the pressure going into the dpf filter is within the predetermined value but is considerably different at the other end of the filter then the engine management system knows there is a blockage and will trigger the dpf regeneration cycle.

A blocked dpf filter will lead to the dpf light coming on, most dpf warning systems are designed to work in the same way, although there are sight differences, ( for example ). The Mazda 6 dpf light will flash when the dpf regeneration is in operation, if the dpf light switches to being constantly on then the dpf filter is most likely blocked.

VW dpf light seems to stay on constantly along with the flashing coil light, this can mean the dpf filter is blocked and at the end of its life, once the VW engine management system records this fault it will shut down the turbo and reduce the engine power to protect them from damage, this commonly known as limp mode.

Ford don’t seem to have a dpf light just generic message on the speed dials which normally says engine system fault, this message is normally accompanied with are old friend the engine management light.

The Peugeot and Citroen dpf system couldn’t be any louder, they have a dpf light on the dash display but all Peugeot and Citroen vehicles have a message display system which tells the driver which particular system is at fault, ( for example ) Depollution System Faulty, so naturally we would assume that the dpf filter is blocked, well that is not the case, the Depollution System Faulty simply means there is a problem with the engine management and is a standard generic term.

If you drive a diesel vehicle from 2006 onwards then it has a dpf filter and it will eventually block, driving your car up the motorway in 4th gear at 50 mph will not fix the problem, the only solution is have the dpf system removed. Once you remove the dpf system it will give your car a whole new lease of life and will preserve your engine and turbo, as for the M.O.T requirement they only check to see if it is fitted to the exhaust system

and will be as when the dpf system is removed it is done in a way which can not be detected. At Hagans Autos we specialize in dpf removal and our happy to advise you in way we can about dpf problems, so please feel free to get in touch with the DPF Northern Ireland experts.