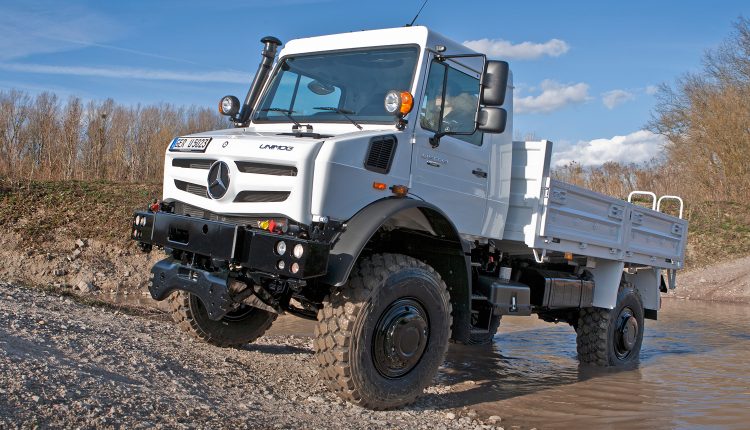 Launched for the first time in 1951, the Mercedes Unimog been offering all this time a single proposal as a professional vehicle for all terrain use. Featuring four-wheel drive, front and rear jacks force differentials for each of the four wheels and suspension, capable of swallowing any obstacle in its way.

These characteristics still hold the front segment of special vehicles able to operate in the most rugged and inhospitable environments. Few vehicles can reach ground or processing capacity of the uinmog.

Now, because of the need to adapt its operation to the demanding standard Euro 6 legislation, Mercedes took the opportunity to make significant changes also looking to add new changes to serve more than one generation to maintain its leadership position.The modification of the cabin, which increases its height and liveability, has been a significant change, but maybe that has less significance. To meet Euro 6 regulations it has completely changed the engine, which is now a four-cylinder 5.1-litre,  provides 231 horse power with no less than 900 Nm between 1,200 and 1,600 rpm.

This new engine now occupies a new position in the vehicle, which further improved weight distribution of the truck. This new location has been mounted at the front radiators and it also includes a more efficient air conditioning system, without resorting to special cooling systems mounted on the roof interior.

Other changes include the new automatic transmission, which now has eight speeds forward and six reverse, apart from the optional gearbox.

To meet Euro 6 rules it includes an advanced particle filter, AdBlue injection and SCR catalyst. The more efficient new engine has managed to reduce fuel consumption by 3% and maintains its characteristics for use in difficult terrain.

In a vehicle like the Unimog, versatility is one of its most important aspects. You could say that the possibilities are virtually endless. It also has the ability to be equipped with special equipment, depending on the type of work that it is needed for without having to install expensive new engines.

Now it is easier to drive a Unimog, since the gear lever, with automatic or manual position, can be operated with finger controls, it is a lot easier than driving a normal used truck.

An improved braking sytem is also in place, particularly important on descents in a vehicle weighing several tons and operating in potentially dangerous conditions which increases the reliability and durability.

From fire fighting, railroad track maintenance, assisting mining machinery, maintenance needs of high-voltage lines, clearing forests or ditches, or as a personal transportation tool … all are activities that have allowed the Mercedes Unimog to garner a recognized reputation for a safe, effective and versatile machine.

This proverbial versatility of the Unimog have thus become an essential tool for industrial work, but also an invaluable help when it comes to addressing natural disasters, so it is the vehicle favorite firefighters and equipment assistance when tries to work off-road. The traditional upholstery of these vehicle can be replaced by van seat covers or or other commercial vehicle covering.

Top Six TV Cars Of The Past