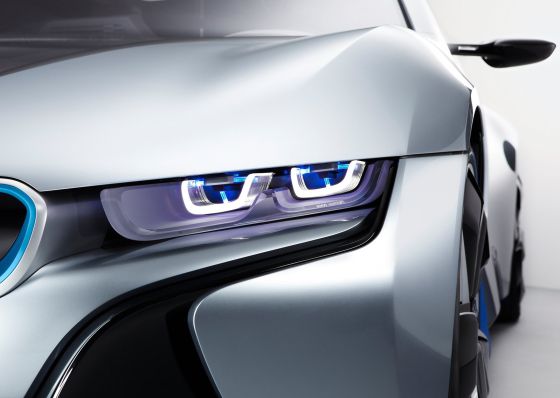 They are able to illuminate up to 600 meters ahead of the car, twice as far as the best current headlights. The new laser headlights represent the latest innovation of car technology, allowing drivers to see much further, enhancing safety. It is the latest development in a technological race that began 130 years ago when lamps illuminated carriages, and has gone through the various stages like halogen, those of xenon and the latest LED or light emitting diodes. This evolution will soon be delved fully into the field of design, the lights have gone from being a functional element to meeting key aesthetic roles in the appearance of a new model. To Taisuke Nakamura, director of the design area of Nissan Europe , they represent the eyes of the car, and are a means to enhance their personality.

The turning point of this new interpretation of headlights came with led lights, born in the 2000s. Besides improving lighting in comparison with halogen and xenon, it will also help develop the aesthetic aspect. The bulb gives way to a cluster of luminous points that can be distributed in multiple ways and the freedom granted in design is becoming a hotbed of creativity for designers

Phillippe Barre, Communications Design Renault says the new LED headlights are like a “light signature”, an element that “enriches the design of the car.” Mercedes goes further and has decided that its new S-Class Coupe will offer new headlights adorned with Swarovski crystal.

But Nakamura highlights another interesting aspect: “The Color of LEDs, closest to white or light blue, conveys quality and technology and helps reinforce the image of the car and the manufacturer “.

It took until 1960 for the first great lighting revolution, halogen headlights, which became a new standard for cars and even today are still used in many models. It gave out more than 100 meters range.

Halogens were the fashionable solution for 30 years, and the trend continued until 1991 when xenon optics appeared, which provide an even more powerful lighting source, which reduced eye tiredness and marked a new technical advancement. LEDs then further improved the functionality of xenon, providing even greater reach and a longer life bulb. “The halogens have a lifespan of 400 to 500 hours, xenon, from 3000-3500, and the leds, from 10,000 to 100,000 “says Carlos Elvira, department manager Seat lighting .

But the new technology of laser lights are set to double the range of vision of the LEDs and can reach 600 meters, as announced by BMW, which will be the first manufacturer to offer them in the BMW i8, its new sports hybrid.

The extent of the key differences between different lighting systems: halogen, xenon, LED and laser apart from the already mentioned visibility advancements are: They emit 10 times more dense light. But there are other important aspects such as color temperature, an indicator that relates to the clarity of light and fatigue that occurs. At higher temperatures, less eye strain. Halogen headlights work to 3,500 degrees, the xenon 4000-4500 and 5000-5200 for led.

The future of hybrid performance cars