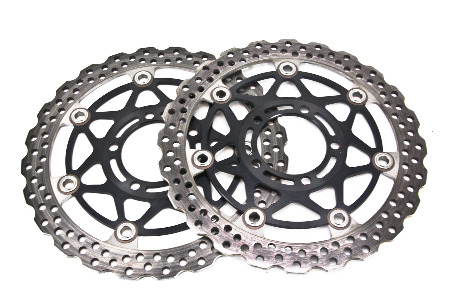 Scrapping a Motorcycle in the UK

There are strict rules and regulations to adhere to within the UK when scrapping a moped, scooter or motorcycle, all breakers offering a service to scrap bikes must be pre-approved by the government as an Authorised Treatment Facility (ATF), this service is usually free. As such, before any motorcycle can be crushed, all fluids (brake, oil, petrol), battery, wheels and tyres must be removed, for environmental reasons. An ATF may charge however it the vehicle is not complete and is missing essential parts.

If your bike has been written off by the insurance company they will usually arrange for it to be disposed of.
A Certificate of Destruction (CoD) must be issued once any vehicle has been crushed, it is the current owner’s responsibility that they receive one and could be prosecuted it they cannot provide one, receiving a fine up to £80. Some treatment facilities do not issue them until the vehicle has been crushed and it is issued several days (usually within seven days) after you drop off the bike (or it is collected) so make sure you follow up if a CoD is not forthcoming.

In terms of notifying the DVLA, this is done by the ATF, however you do need to complete section 9 of the logbook and post to the DVLA, a letter confirming receipt should follow from the DVLA within a few weeks. If not then call them on 0300 790 6802.

To combat increased metal theft in the UK, from October 2013 it is also illegal to be paid in cash for scrapping a bike.

Bike Breakers operate a nationwide service and can collect any bike for free within the UK. Their network of couriers operate seven days a week. If you have a bike you are looking to dispose of then email enquiries@motorbike-breakers.com. All MOT-failures, accident-damaged, insurance write-off, barn-find, abandoned motorcycles and un-completed project bikes considered.

Unfortunately, the UK market has been flooded in recent years with poorly-built, cheap imported scooters from China, many of which are of a poor build quality and break down after just a few years and often within the manufacturer’s warranty! Used spare parts are in poor supply and low demand, we are therefore regularly asked to collect broken Chinese scooters that are just 2-3 years old but sadly there is virtually no money in them and it’s not worth the effort, even at scrap metal rates, which is currently at an all-time low!

The breakers industry has been in decline in recent years with the growth of the internet , meaning anyone can sell their own bike from the comfort of their own home (with little effort) and immediately have a global audience at their fingertips, making the breaker yards largely redundant. Buyers are equally attracted to the same venues as the sellers, largely due to the ease of use, again from the comfort of their own home.