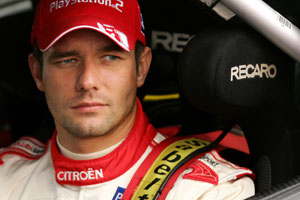 Sébastian Loeb…who are you? Simple…he is the man that had the world waiting 8 months before smashing the Pike Peaks International Hill Climb record by almost 15% in his Peugeot 208 T16 at a time of 8:13:878 – quicker than the on board computer even predicted was possible at a theoretical 8:15:000.

Born on 26th February 1974, the French Rally Driver competes in the World Rally Championship (WRC) for Team Citroen and is the most successful WRC driver having won it 9 times. Sébastian switched to rally driving in 1995 and won the Junior World Rally Championship in 2001. Citroen then snapped him up in 2002 and in 2004 he won his first of nine WRC titles and to date has won all but 3 tarmac surfaced rallies since 2005, pretty neat huh? Along with his suitcase of 9 WRC titles he also has the record for most points, most wins and most podium finishes. But did you know he was originally a gymnast? Neither did we…just a bit of irrelevant information!

So, what’s this all about? Well, Pikes Peak is a mountain in the Front Range of the Rocky Mountains within Pike National Forest just west of Colorado Springs, Colorado, in El Paso County in the grand old US of A. At 14,110 feet it is a brute of a track! In 2012 Rhys Millen competed the course and setting a new record of 9:46:164. Enter Sébastian Loeb…on Sunday 30th June 2013 he decided to annihilate Millens record by putting in an impressive 8:13:878 – BOOM!

Not only was this a new record but it killed Millens time by just under 15% and also makes it the only time in the 8 minute bracket! Impressive as far as we are concerned. So what else happened? Well, Millen was there checking things out and decided to jump in to his motor and follow Loeb round the track. He managed to beat his own record by 44 seconds but it wasn’t good enough to beat the fella in front. Now, get a load of this…Loeb’s average speed around the track? Just a mere 87.461mph over the 12.72 mile track with 156 corners.

Sébastian was quoted saying “For me this was the race of the year. At the beginning of my run there was a bit of pressure for sure because I knew there was so much work and investment from Peugeot and all the different partners. Now, after all the practice, it was just down to me and I had to perform”. He went on to say “I’m really happy as that was a very good run in the end. I really didn’t expect anything better than 8 minutes 15 seconds, so to do 8 minutes 13 seconds was fantastic.”

It is fair to say Loeb completely ruined the track in his Peugeot 208 T16 so it begs 2 questions to be answered…is the 7 minute club far away? And which manufacturer is going to step up? The world awaits…