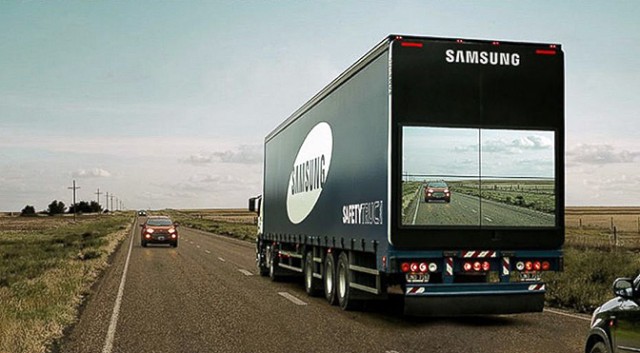 Sometimes, an oxymoron turns into a reality. Some splendid inventions might be the reason for the impossible to become possible – something like driving around a truck safely with the help of a gadget, or being able to watch a show or catch up on some news while on the road. And the new inventions keep coming, for example:

Good news! You’d be able to witness a huge Samsung gadget moving on wheels. It is a truck that shows what lies ahead on your path towards your destination, so you not only move with caution but also think twice before you plan to cross the next big vehicle.

People have repeatedly faced difficult situations when they have huge vehicles, such as 18-wheeler trucks, in front of them on the roads that obscure the view for them and so are they unable to see what is coming towards or driving besides the truck. This way, the driver finds it difficult to plan taking another route as they’re unsure of the traffic that follows the giant vehicle in front of them (if more than one, they just block the entire view).

Samsung Safety Truck is equipped with cameras in front, which give a clear front view of the road that lies ahead to the vehicles behind the truck. Some deadly cases are repeatedly reported when cars try to overtake trucks, unsure of the vehicles in front or passing by. The innovative phenomenon of ‘See – Through’ Truck streams live view on its back doors through front facing cameras. The transparent truck is assumed to be a great idea for safety reasons especially for highways and long routes.

Samsung has been successfully working in the field of information technology as one of the leading edge companies of the industry. And of course, this company never ceases to amaze the world with ideas brought to life in the form of wonderful gadgets. And this time, Samsung has just moved ahead with the use of technology to safeguard the road trips for the drivers and passersby equally.

The Need for Safety Trucks

Roadside accidents due to high speed and overtaking without caution, along with drunk driving, cost a number of lives every year. Thankfully, with this novel idea, the drivers will be able to see towards the road ahead of the truck and take precautionary measures. This step is assumed to be an ideal way for drivers to avoid accidents on double roads when they try to overtake; not knowing what follows the larger vehicle in the front and what dangers might just be waiting for them.

Although the prototype seems to be nothing less than a perfect example of innovation, safety measures were taken very seriously to come up with a transparent truck idea. What’s still missing are the government permits for this technological advancement, which promises the safety of not only the vehicle drivers, but the passengers, passersby, and other vehicles on the road.

The prototype truck will need more testing and probably some technical amendments and advancements before being launched on the roads (if it gets launched at all, that is). But this idea, regardless of its launch, can definitely save many lives from miserable circumstances and fatal accidents trying to overtake huge trucks.

The Missing Part of The Puzzle

And then the story comes to a halt because every story has its peak and also some glitches no matter how perfectly written. The major glitch of this story – high cost. The fact that Samsung gadgets are cost effective shouldn’t make people expect the same of the safety truck (the Transparency costs more). The biggest obstacle in the success of this lofty idea is the fact that it is very expensive and not many business owners would be able to afford it.

The problem, however, is not with the cameras installed in the front of the truck. It is the large display screen that not everyone might be able to afford. And since it benefits the one behind the truck, so why would someone invest that much anyway? That’s a question that still needs to be answered.

Safety is of course the fundamental reason this idea has been initiated, and we’ve got our fingers crossed to see how far it goes.

It Could be Distracting for Other Drivers

Chances are, this idea can be implemented if the screen is made cost effective. However, these transparent UK trucks might deviate the attention and focus of the drivers towards the large display. This is one of the major hazards this idea directed towards safety might be causing once it’s officially launched on the road. It has one thing to showcase, i.e. the front view on the wide display screen, but what about the surroundings that the screen does not show? The drivers would tend to rely on the display and might not be cautious of the obstacles and roadblocks that the screen on truck wouldn’t be able to show.

Fingers are crossed for the revolutionizing idea to become a tremendous success and get going on the long journeys.

More vehicles to be fitted with road safety tech: 5 ways to make your

The Best Most Economical Vans For Sale